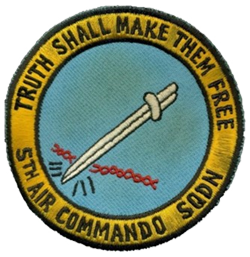 The 5th SOS traces its history back to 1944 and the 5th Combat Cargo Squadron. During World War II, the 5th saw extensive combat action in the Asiatic-Pacific theater.

It was also involved in the air offensive against Japan. During this time it operated the C-46 and C-47 type aircraft. Inactivated after World War II, it was reactivated in 1965 as the 5th Air Commando Squadron at Nha Trang Air Base, South Vietnam. The 5th ACS conducted psychological operations by means of loudspeaker broadcasts and leaflet dissemination; transported psyops printed matter and personnel; and supported related civic actions, humanitarian programs, and other SOF activities.

The C-47's of the 5th Air Commando Squadron were equipped with giant speakers mounted in the cargo doorway to fly PSYOP missions. These aircraft would circle over the target area at about 3,500 feet while a PSYOP translator would broadcast the benefits of the South Vietnamese government. Along with the message of persuasion to surrender would be a warning to the Viet Cong not to fire at the speaker aircraft as great trouble would befall them.

Unknown to the enemy, an AC-47 gunship, which carried 24,000 rounds and three 7.62mm mini-guns with a fast (16,000 rounds per minute) or slow (3,000 rounds per minute) rate of fire, was flying escort below and behind the PSYOP aircraft. The AC-47's were allocated the call sign "Spooky", and also earned the nickname "Puff the Magic Dragon", from those who had witnessed its nighttime show of firepower. When the enemy began to fire at the loudspeaker aircraft, the roar of Spooky's miniguns would answer them. As the silence descended again, the PSYOP aircraft would retort "See, I told you so!" The reputation of the vengeful dragon spread quickly among the superstitious people. Captured Viet Cong documents told of orders not to attack the Dragon, as weapons were useless and would only infuriate the monster.

During the first six months of 1966 the squadron dropped more than 508 million leaflets. A major part of the "Chieu Hoi" (Open Arms) program, the leaflets urged the Viet Cong to surrender to Government forces, promising them good treatment and eventual repatriation to their families.

The 5th Air Commando Squadron had four U-10 Couriers and one C-4 Skytrain aircraft. A mission was called "Fire Dragon." consisted of one spotter aircraft, two A-1E Skyraiders, "Puff the Magic Dragon" and a leaflet C-47. The spotter would find a Viet Cong camp late at night, the A-1E's would light it up, "Puff" would fire thousands of rounds at it, and then the C-47 would drop leaflets letting them know that the fire dragon was after them and where to go to surrender.

There was also a campaign where dropped leaflets had pictures of different weapons along with the price we would pay if they gave up and brought in a weapon. When a Viet Cong gave up and turned in a weapon, he got paid a reward, stayed in a camp for two weeks getting fed, and would be sent to educational classes. At the end of the two weeks he was returned to the general population. It was a good program, but apparently no one was keeping records. Once they began keeping records it was discovered that some people had surrendered three and four times.

The biggest single operation of Project Quick Speak was its Tet program. More than 103 million leaflets were dropped and 380 hours of speaker broadcasts were flown in an effort to exploit the natural desire of Viet Cong and North Vietnamese soldiers to be with their families during Tet, the nation's most important holiday season. The results of the Chieu Hoi program were outstanding. While the Army was busy with a sometimes-questionable body count, the psychological warfare convinced 34,000 Viet Cong to give themselves up to our forces in 1967.

The 5th ACS was renamed a Special Operations Squadron in 1968 and operated C-47 and U-10 aircraft in these missions until 1969, at which time it was inactivated. On 7 January 1995, the 5th SOS reactivated in the Air Force Reserve at Duke Field, Florida and was assigned the MC-130P Combat Shadow mission.

Veteran reservists from the 711th SOS, assisted by a small corps of active duty advisors, stood the squadron up, converted to a new weapon system, declared Initial Operating Capability (IOC) status, deployed to Operation JOINT ENDEAVOR twice, and completed its first deployed Operational Readiness Exercise within 24 months of standup. In the last two decades, the 5th SOS has been recognized as one of the top squadrons by both AFSOC and AFRC.

The 5th SOS awards include: the 1996 Florida Reserve Officers Association Flying Squadron of the Year; the 1996, 1997 and 2002 Air Force Reserve Command's Grover Loening Trophy for top flying squadron of the year; and the 1998 AFSOC IG's recognition as "best of 8 flying units in the 16th SOW." In 1999, the 5th SOS became AFSOC's first Reserve-Associate flying unit.

In September 2001, the 5th SOS was mobilized and flew numerous combat sorties in Operation ENDURING FREEDOM. In 2006, after receiving an excellent rating in its Operational Readiness Inspection, the squadron volunteered and relieved the 9th SOS by deploying to Operation IRAQI FREEDOM. In November, 2007, the squadron began transition to the U-28 and Combat Aviation Advisor (CAA) missions, and in May, 2008 flew its last Combat Shadow mission. It has since flown over 17,000 hours in the PC-12/U-28, including 8,500 combat hours on more than 1700 combat sorties.

Since March, 2008 the squadron has been and will remain continuously deployed, and its instructors have taught more than 766 PC-12/U-28 and 100 CAA students.