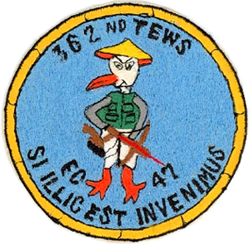 Activated in July 1966 as Detachment 1 of the 361st Reconnaissance Squadron, the first personnel (an officer and twelve enlisted men) arrived at Pleiku Air Base, Republic of Vietnam the next month. Calling themselves the “Dirty Dozen”, they set up shop in an area previously occupied by the South Vietnamese Air Force. The first EC-47 aircraft and crew arrived on December 8th and flew the first operational mission four days later. Other aircraft and crews arrived soon after. Since a large number of these EC-47 aircrews had prior WWII and/or Korean War experience flying the Gooney Bird...and were the age of many grandfathers...the detachment soon acquired the nickname, "The Elderly Warriors". Meanwhile back at Saigon (Tan Son Nhut Air Base), the “Antique Airlines” moniker would soon be coined for the aged aviators flying missions with their headquarters squadron. The detachment was renamed the 362nd Reconnaissance Squadron on January 31, 1967. It was renamed again, this time as the 362nd Tactical Electronic Warfare Squadron (TEWS), on March 15, 1967. For a time during the war, their aircraft were identified with the AN tail marking.

The mission of the 362nd TEWS was to provide the aircraft, maintenance personnel and the “front-end” crews to fly and maintain the EC-47 as the airborne platform for the United States Air Force Security Service “back-end” crews that performed radio direction finding and signals intelligence collection missions over the battlefields of Vietnam, Cambodia and Laos. These back-enders, mostly enlisted Morse code radio operators, Vietnamese linguists, communications analysts, and equipment maintenance personnel, were assigned to Detachment 2 of the 6994th Security Squadron.

Rt, 1966, Det. 1 had arrived. Among those first crew members was a Lieutenant Colonel Leslie K. Skews who has since returned for a second tour. Since a large number of that original crew were in the primary zone for "grandfather", Det. 1 acquired the nickname, "The Elderly Warriors". The name is gone, but the spirit prevails. On 31 January 1967, Det. 1 became the 362nd Reconnaissance Squadron.

As our name reveals, the 362nd is, and had been a "recce" outfit. We've been very successful in out mission in the last three years and have overseen much of the action in South Viet Nam. While performing our duties, we've seen places such as Ben Het, Duc Lap, Kam Duc, and many other remote locations in South Viet Nam. The defenders of these spots have often expressed their gratitude to the 362nd.

We fly our missions in the "Grand Old Lady", the C-47, first built by Douglas in the late 1930's. She doesn't fly as fast, or as high, as many of the aircraft presently being used in this war, but she is one aircraft here with three wars to her credit. For many of the 362nd's older aircraft commanders, this is a reunion with the "Douglas Belle", for they knew her in WWII. As for our co-pilots, one war in the C-47 is more than enough.

Though they have been busy with their mission, squadron personnel have initiated many civic action programs. In 1967, we constructed a windmill for the Montag nard Agricultural Training Center. In 1968, we built a structure for the Pleiku Leprosarium. In 1969, our project was to help the villagers of Pleiku Roh put a new roof on their school house. These activities have earned the 362nd many friends, in Viet Nam.

In an effort to make their "Longest Year" pass a bit faster, the soldiers of the 362nd developed many pleasant diversions. The sound of bets, bid, laughter, and church keys engulfed the living areas. Each month, "Hail and Farewell" parties were thrown for arriving and departing personnel. We all look forward to outlast "Hail and Farewell" party. We've also helped many of our newly promoted members spend their first pay checks in their new grades.

As part of an emergency physical fitness program, we had a "health jamboree" in November, 1969. We played volleyball and basketball, and everyone had a go at running a mile. (A few even finished the first quarter!) Of course, the big challenge was the officer-enlisted softball game. All of the benefits of exercise were nullified when we sat down to hamburgers, barbecued chicken, and hot dogs not to mention the beer.

In December, 1969, the long wait was over. The officers hurriedly moved out of the RMK area to make way for Vietnamization of Pleiku AB. "For immediate occupancy", we were told, but no one knows if anyone lives in RMK yet or not. Few of us knew that our predecessors had also made a great move way back in 1967. The officers moved from hootches in the MACV area to the RMK area. Shortly after they got there, they built everything from patios to bunkers, and for this they became known as the "362nd Grey Mules", our answer to the "Red Horses" of the Civil Engineering Squadron.

For three years the personnel of the 362nd TEWS have endured their "Longest Year" here at Pleiku AB. Each man counts the days until he can board the "Freedom Bird" for home, but he will always remember the close friends made while in Viet Nam's Central Highlands.