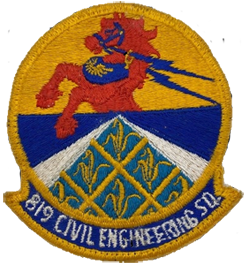 In September 1965, the Air Force created the Red Horse Squadrons (Rapid Engineer Deployable Heavy Operational Repair Squadron, Engineer). Each of the six squadrons, including the 819th, was organized as a mobile, self-contained unit with a range of skills and construction equipment to provide combat engineering support to Air Force tactical units in a theater of operations. The squadron included medical, food s service, vehicle and equipment maintenance, and supply personnel to ensure self-sufficiency. In 1966, the Red Horse Squadrons were deployed to bases throughout Vietnam.

Of these, the 819th’s role was unique among Red Horse as it deployed to an undeveloped area classified as unsecured to establish a base camp without recourse to any base support functions.

In Vietnam, the 819th Red Horse Squadron was stationed primarily at Phu Cat A.B. and was responsible for building facilities in the former Viet Cong training area. The 819th unit was the only unit at the base to operate and maintain heavy equipment. The men from the squadron were responsible for the earth movement and construction of most all of the buildings, roads, and runways which enabled the Phu Cat A.B at the end of the supply line, to acquire necessary food and materials. In a single year, the 819th Squadron moved 1.659 million cubic yards of earth, poured 15,500 cubic yards of concrete, and constructed buildings totaling 633,000 square feet. In addition, they placed 2.1 million square feet of AM-2 matting, finished over 50,000 linear feet of utility lines, fences and storm drainage facilities, erected more than 5,000 linear feet of aircraft revetments and completed more than 5 miles of road.

Detachment 1 of the 819th was deployed to Pleiku A.B. in the Central Highlands. There they continued with construction and supervision of Vietnamese civilian workers. Much of the mission in 1967-1968-1969 involved repairing damage from rocket and mortar attacks due to constant Vietcong and NVA activity in the area. The unit members also routinely ran convoys off base under their own security for supplies and to safely pick up and return civilian employees. The Red Horse Squadrons left Vietnam in 1970.