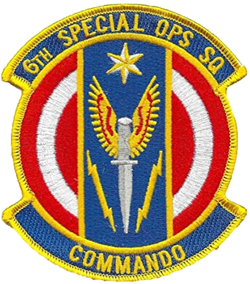 A 147 page Master's Thesis on the 6th Air Commando Squadron by Arthur R. Halliday can be viewed using the link below. Great insight into this and other ACS/SOS units air and ground operations.

The 6th SOS was originally constituted as the 6th Fighter Squadron (Commando) on Sept. 22, 1944 as part of the 1st Air Commando Group. The squadron flew the P-47D Thunderbolt and operated out of Asansol, Fenny and Cox's Bazaar, India. In May 1945, the unit converted to the P-51 Mustang and returned home for deactivation in November 1945.

The unit was reconstituted at Hurlburt Field, Florida, on 27 April 1962, and assigned to the 1st Air Commando Group, flying the B/RB-26, U-10, T-28, and by early 1963, the A-1E (call sign HOBO). The unit's mission was to train in counterinsurgency (COIN) and unconventional warfare, and demonstrate those tactics both within the US and abroad. Squadron personnel served as advisors to Vietnamese Air Force personnel at Bien Hoa. During the same period, at Howard Air Force Base, Panama, they trained Central and South American airmen in COIN tactics, techniques, and procedures.

All aircraft were reassigned in July 1963, except the T-28, and many personnel were transferred to form the cadres for new special operations units. By March 1964, the squadron increased manning sufficiently to deploy to Udorn Air Base, Thailand, to train air and ground crews in COIN operations.

The unit moved with the 1st Air Commando Wing to England Air Force Base, Louisiana, in January 1966, and continued the same type of operations as previously performed at Hurlburt Field (to include the return of the A-1E aircraft). By December 1967, the last of the T-28s were transferred, and the unit started receiving A-1G, H, and J aircraft.

The unit deployed to Pleiku Air Base, Vietnam, in February 1968, and was reassigned to the 14th Air Commando Wing. The unit was reassigned to the 633d Special Operations Wing on July 15, 1968, and re-designated the 6th Special Operations Squadron. The unit flew combat missions, including air support for ground forces, air cover for transports, day and night interdiction, combat search and rescue support, armed reconnaissance, and forward air control. The unit was deactivated on Nov. 15, 1969.

The unit was reactivated again on Jan. 6, 1970 at England Air Force Base, Louisiana, with the mission of replacement training of US Air Force pilots in A-37B aircraft. The unit was re-designated as the 6th Special Operations Training Squadron on Aug. 31 1972. The unit was assigned to the 1st Special Operations Wing at Hurlburt Field, Florida, on July 31, 1973 and reassigned to the 23d Tactical Fighter Wing on Jan. 1, 1974. The squadron was deactivated Sept. 15, 1974.

In the spring of 1991, a FID office was created in the Plans, Programs, and Acquisition Management Directorate of Headquarters AFSOC, and an aviation-FID concept of operations study was published. In July 1992, the organization conducted a "proof-of-concept" deployment to Ecuador with the US Army 7th Special Forces Group. The success of the deployment led to a Commander, USSOCOM request for an early unit stand-up. In August 1993, the organization became Detachment 7, Special Operations Combat Operations Staff.

In March 1994, the first major aviation-FID deployment was conducted in Ecuador, and in April 1994, the organization was renamed the 6th Special Operations Flight and realigned under the 16th Operations Group of the 16th Special Operations Wing, and the unit was upgraded to squadron status in October 1994 to reflect its growth in mission and personnel. The squadron received its first two aircraft, UH-1N Hueys, on Oct. 11, 1996, and marked its first flight in 27 years on Dec. 20, 1996. Over the years, members of the 6th SOS have taught foreign militaries in a variety of aircraft to include the Russian Mi-8 and Mi-17 helicopters, the Spanish CASA 212 transport, the Cessna 208, the Beech King Air 350, the French AS-332 Super Puma, the Canadian DHC-6 Twin Otter, the Basler BT-67, all models of the US Huey helicopter and several USAF C-130 variants.