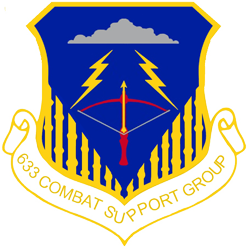 The 633rd Combat Support Group was activated at Pleiku Air Base on 14 March 1966 taking over the duties of the provisional 6234th Air Base Squadron which managed construction and other activities at the base after the Republic of Vietnam Air Force (RVNAF) moved to Nha Trang. During 1966 USAF personnel assigned to the base increased from 150 to over 2500. In September 13 barracks housing over 900 men were completed and in October a further 10 barracks were completed. The A1 equipped 1st Air Commando Squadron (moving from Ben Hoa Air Base in 1966) operated as part of Farm Gate.

From 1968 to 27 June 1972 the 362d Tactical Electronic Warfare Squadron flying specially-equipped EC-47s were assigned to Pleiku. These aircraft were equipped with various electronic warfare components.

The 633rd Special Operation Wing was activated at Pleiku on 15 July 1968 taking over from the 633rd Combat Support Group.