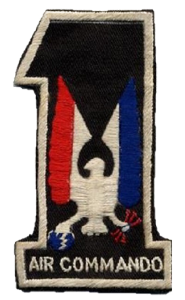 The 1st Special Operations Squadron traces its heritage back to the 1st Pursuit Squadron which activated on Aug. 1, 1939, at Maxwell Field, Ala. The unit was re-designated the 1st Pursuit Squadron (Interceptor) Dec. 6 later that same year. The squadron was utilized for gunnery testing and training and was assigned to the 23rd Composite Group which was later designated the Air Corps Proving Ground Group. The squadron flew a variety of aircraft to include the Curtiss P-36 Hawk, Martin B-12, Lockheed C-40, Douglas O-38, Curtiss YP-37, Martin B-10, North American BC-1, Bell P-39 Airacobra and the Curtiss P-40 Warhawk. The squadron moved to Orlando, Fla., Sept. 2, 1940, and to Eglin Field, Fla., June 29, 1941. The squadron remained at Eglin Field until it was disbanded May 1, 1942.

The history of the 1st Pursuit Squadron (Interceptor) was reconstituted with the activation of the 1st Liaison Flight Oct. 24, 1949, at Biggs Air Force Base, Texas. The unit flew administrative flights utilizing Beechcraft C-45 Expeditors and DeHavilland L-20 Beaver aircraft. The flight was re-designated the 1st Liaison Squadron on Feb. 13, 1953. The squadron moved to George Air Force Base, Calif., April 8, 1953, and operated Sikorsky H-19 Chickasaw helicopters. The squadron was inactivated Jan. 18, 1954.

The 1st Air Commando Squadron (Composite) was activated June 17, 1963 at Bein Hoa Air Base, South Vietnam. The unit was made up of personnel from the initial Farm Gate detachment of the 4400th Combat Crew Training Squadron. Their official mission was to train South Vietnamese Air Force pilots. In reality, the crews were flying counter insurgency missions throughout South Vietnam. The pilots were seasoned combat veterans who had vast experience flying strikes against the Viet Cong. The aircraft utilized by the 1st were antiquated Douglas B-26B Invaders, SC-47 Skytrains and North American T-28 Trojans. The aircraft were operated in VNAF markings during the early stages of the conflict. Crews from the squadron were also required to have at least one Vietnamese Air Force pilot or observer on board the aircraft while conducting combat operations.

The B-26 and T-28s had serious maintenance issues ranging from a shortage of spare parts due to the age of the aircraft to total wing failure. Even with these problems the squadron was able to keep up an impressive sortie rate. The increased amount of anti-aircraft fire from the Viet Cong took its toll on the squadron. Three B-26B crew members and one T-28D pilot from the unit earned the Air Force Cross for their actions during close air support missions. All four were awarded the medal posthumously. In 1964 the squadron relinquished its B-26B and T-28s and replaced both aircraft with the Douglas A-1E Skyraider. The squadron also received a handful of Helio Courier U-10 aircraft.

A team lead by Capt. Ronald W. Terry arrived at Bein Hoa, South Vietnam Dec. 2, 1964, to modify a few SC-47 Skytrains assigned to the 1st ACS into gunships for testing purposes. Nearly two weeks after the team arrived, two aircraft from the 1st ACS were modified into FC-47, later re-designated as AC-47, gunships. A FC-47 assigned to the 1st ACS completed the first side-firing gunship mission in combat Dec. 15, 1964.

The squadron moved from Bein Hoa to Pleiku Air Base, South Vietnam Jan. 5, 1966, without the SC-47/FC-47 and U-10 sections, leaving the squadron with only A-1 Skyraiders. The unit's Skyraider pilots performed a variety of missions to include air cover, close air support for ground forces and special forces camps, directing air strikes, armed reconnaissance, escort for special missions, and search and rescue.

On March 10, 1966, 2,000 North Vietnamese Army soldiers overran a special forces camp in the Ashau valley. Pilots from the 1st ACS, Maj. Bernard Fisher and his wingman, were diverted to provide close air support for the remaining soldiers still inside the camp. Once on scene, Fisher found multiple aircraft in the area. As the on-scene commander he led a flight of four A-1 Skyraiders beneath the cloud cover and made multiple strafing runs on the NVA troops swarming the camp. During the mission an A-1E Skyraider was hit in the engine and caught fire. The pilot released all his ordnance and crash landed his aircraft on the airstrip near the camp. Fisher observed the pilot running from the flaming aircraft and elected to land on the battle-torn strip to rescue the downed airman. Fisher landed on a pierced steel planked runway covered with debris and holes from mortar rounds. After landing, Fisher had to taxi nearly the length of the runway under fire to get to the downed pilot. After the downed pilot climbed onto the wing, Fisher grabbed him by his flight suit and pulled him into the aircraft. Using what remained of the runway; Fisher opened up the throttle and took off. Major Bernard Fisher was awarded the Medal of Honor for his actions.

The squadron was re-designated the 1st Air Commando Squadron (Fighter) Aug. 15, 1967. In December 1967, the squadron was moved to Nakhon Phanom Royal Thai Air Force Base, Thailand. The squadron's designation was change to the 1st Special Operations Squadron on Aug. 1, 1968.

As the 1st SOS continued supporting operations in Southeast Asia, its personnel continued earning awards for heroic actions in combat. Three Skyraider pilots from the 1st SOS earned the Air Force Cross in 1972. Maj. James C. Harding, one of the pilots, was awarded the Air Force Cross for his actions April 10-13, 1972. While serving as the on-scene commander during a complex search and rescue mission, Harding repeatedly attacked anti-aircraft artillery positions allowing the rescue helicopter to successfully save the downed pilot.

The last 1st SOS Skyraider missions were flown in November 1972. The aircraft were transferred to the South Vietnamese and other friendly air forces.

On Dec. 15, 1972, the 1st SOS relocated to Kadena Air Base, Japan without personnel or equipment. The unit absorbed the personnel and equipment from the 90th SOS which flew Lockheed C-130E(I) Combat Talon aircraft, which were later designated MC-130E.

The squadron established a forward operating location at Nakhon Phanom Royal Thai Air Force Base, Thailand. From Nakhon Phanom, the 1st SOS flew psychological warfare missions over North Vietnam and Cambodia. Missions flown over North Vietnam ended with the cease fire agreement signed on Jan. 28, 1973. The squadron continued to fly missions over Cambodia conducting high altitude container delivery system drops to outposts. The last of these missions were flown during the spring and summer of 1974.

In April 1980, air crews from the squadron participated in Operation EAGLE CLAW, an attempted rescue of American hostages in Iran. MC-130E aircraft from the 1st were deployed from Kadena to Masirah Island, off the East coast of Oman April 15, 1980. Nine days later, three MC-130E and four EC-130 aircraft departed Masirah Island for Iran. All three Combat Talon I aircraft used during the operation were assigned to the 1st SOS. After penetrating Iranian airspace, the aircraft encountered an unexpected sand storm known as a haboob, all seven aircraft flew through the storm and arrived at Desert One, a refueling/staging site. The same could not be said of the eight Navy RH-53D Sea Stallion helicopters that launched from the USS Nimitz. The helicopters were in trouble after flying through the haboob at low level. The mission required six operational helicopters to continue on from Desert One to complete the mission; only five of the six helicopters that landed at Desert One were mission capable, and the operation was aborted. While repositioning aircraft to take on fuel for the return trip, a RH-53D crew became disoriented and struck an EC-130E. The ensuing crash killed eight service members with others suffering serious burns. The remaining helicopter assets were ordered to be abandoned at Desert One. The wounded and helicopter crews were loaded onto the remaining fixed wing aircraft and flown to safety. The aborted mission ended in tragedy, but the failure at Desert One was used as catalysts to reshape special forces capabilities.

After Operation EAGLE CLAW, the 1st relocated from Kadena to Clark Air Base, Philippines, Aug. 12, 1981.  Soon after the move the squadron was involved in another tragedy. On Feb. 26, 1981, a 1st SOS crew was departing Cubi Point Naval Air Station during an exercise mission in support of Specwarex 81. The aircraft had a crew of nine and 15 special operators participating in the exercise. The Combat Talon I crashed 15 minutes after takeoff from Cubi Point. Local fishermen observed the aircraft impacting the water, and were the first on scene. The fishermen were able to rescue one person from the crash, who was thrown from the aircraft. The exact cause of the crash could not be determined, the ensuing investigation pointed to crew fatigue, operations tempo and the possibility of a terrain following radar malfunction.

In April 1989, the 1st SOS was assigned to the newly activated 353rd Special Operations Wing at Clark. The activation of the wing brought together Air Force special operations assets in the U.S. Pacific Command theater.

A day after Christmas 2004, an earthquake measuring 9.1 on the Richter scale occurred in the Indian Ocean generating a tsunami that killed over 275,000 people throughout the region. The 1st SOS and 17th Special Operations Squadron flew nearly 1 million pounds of relief supplies and cargo to support recovery and aid efforts. The flying squadron's ability to land on short unprepared strips helped distribute over 600 aid workers into some of the hardest to reach areas.

On Sept. 26, 2008, members from the 1st SOS, 320th STS, and the 18th Wing's 31st Rescue Squadron conducted a complex rescue operation at night in order to save two mariners who were injured in crane accident aboard a cargo vessel, the Occam's Razor. A joint team of pararescue men and combat controllers were flown to the vessel situated 750 nautical miles from Guam onboard a MC-130H Combat Talon II from the 1st SOS. Both men were evacuated to a Hospital on Guam.